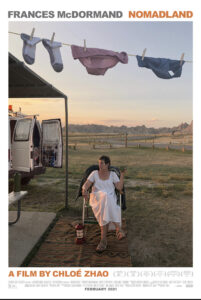 If you have not seen the movie Nomadland, I recommend it. I signed up for Hulu so I could watch it at our Air B&B in Bisbee Arizona. We are not RV Nomads, but we have seen them everywhere. We can check into Air B&B’s, and that is a big difference. Southern Arizona is filled with RV parks and groups of RV’s clustered on open desert, places featured in the movie. You can see why they are there.. its practically free, the weather is good and it beats a parking lot in North Dakota. In the movie we understand that the protagonist in the end chooses to be a Nomad, though not everyone does. The movie makes clear that many are forced into this lifestyle by the lack of a security net in our most wealthy of countries.

We left the Alpalca ranch and headed for the town of Bisbee, AZ for a week of reliable WiFi and virtual work. I found an Air B&B just out of town to give us a bit more space. (It means that I can sleep in while James starts his day on East coast time.) Bisbee is an old mining town. The Copper Queen Mine and the nearby open Lavender Pit were the real deal, in operation from 1850-1970, pumping out record amounts of Gold, Silver, and lots and lots of Copper. Eight miles from the Mexican Border, it lies within the “Gadsden Purchase”, the last piece of land added to the contiguous American states in 1854. The Gadsden Purchase stretches from the Colorado river at Yuma AZ half way across New Mexico to El Paso Texas. It was bought from Mexico for ten million dollars primarily for the rights to its minerals and to open up the west to confederate expansion. For the most part it seems pretty desolate. 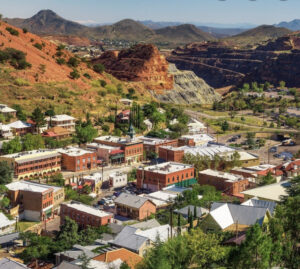 At one point in time Bisbee was the biggest town between St. Louis and San Francisco, home to 9,000 people. Tucked up into the mountains, Tombstone Canyon Road (AKA Main Street), is lined with handsome Municipal buildings built of stone, a beautiful library, post office, an opera house and big hotels and mirrored old-timey bars. The public school buildings rival any big city’s in size and style. Victorian cottages are built into the slopes surrounding the town and have lovely gingerbread and porches in all in stages of repair. After taking the Copper Queen Mine Tour (Covid Safe) I learned that the mine at the bottom of Tombstone canyon Road had miners working day and night until it finally closed in 1970. That is when the hippies moved in. Now Bisbee is a cultural Mecca.. music, art centers, progressive politics, it reminds me of Provincetown MA. It’s charming architecture and good weather mean the real estate prices are rising.. though it seemed still pretty affordable to a Bostonian. Matt, our host, had arrived via San Francisco and was in the process of turning beat-up cottages into stylish Air B&B’s. Most people were wearing masks, except in the cool darkness of Elmo’s, the biker bar. The town seemed quiet and covid-vacant and we didn’t really eat out except on the porch of a Mexican place, but it was fun to be there. I suspect it will surge back after the pandemic. The vibe was mellow.. lots of beards and vintage stores, music venues (closed) restaurants (open) art galleries (mostly open). My favorite siting was of a young Dad walking his dog and his 6 year old daughter while playing his banjo down Tombstone Canyon Road. Next stop was a natural phenomenon: White Water Draw, a wildlife refuge that holds a shallow marsh in the middle of the desert. Camping overnight (free) our goal was to see the huge winter population of Sand Hill Cranes in their migration North. We got there in the evening and 30,000 cranes were milling around in the water peacefully settling in for the evening. Overnight they huddled closer and closer together into the middle of the water to protect themselves from coyotes. When we got up before dawn the next day they were agitated: flapping and honking. Walking out to the marsh we felt transported as they launched out in endless strings heading North towards the Arctic in the rising sun over the desert. Covid wasn’t going to stop them. It was a sight I will never forget. When the the sun comes up in the desert it is GAME ON: time to put your hat on and start the day. Like the birds it was time for us to move: the East was calling. After a weekend in a lovely campsite in the Chiricahua mountains and a few more birds species (“come back in two weeks” said a local birder) we crossed into New Mexico and headed to Albuquerque though the Gadsden purchase. The only man-made feature in the landscape was the defunct railroad grade that had linked Bisbee to El Paso, TX. Otherwise it was endless open desert with occasional yuccas, punctuated by parked, somewhat menacing border patrol cars. Human habitation was thin to non-existent. Trump’s black wall stood lonely in the distance. Anyone who was trying to cross the border and run across that endless expanse could be picked off as easily as a sandhill crane outside of it’s flock. The wall and the border patrol cars seemed redundant to me.

We were traveling to our date-with-destiny at La Mesa RV center: sales and service. The water pump in our van’s living quarters had been malfunctioning for awhile and it was getting worse. James had found his inner plumber and had shored it up, but it was time for professionals. (Warning to prospective RVers.. be prepared to read multiple thick owners’ manuals carefully and be handy. Thankfully James is, because I am NOT.)

We will be in New Mexico for awhile and then Kansas to see my son and his family and then home.. well, at least that’s the plan.

Thanks for reading and stay safe, 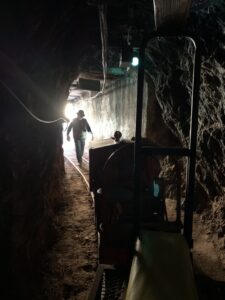 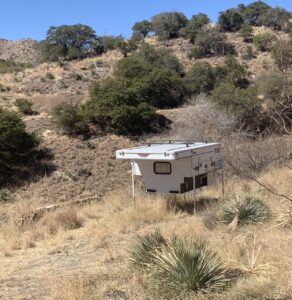