We are racing across the prairie to the strains of the “Orange Blossom Special” hoping to make dinner at my son’s house in Lawrence, Kansas and I suddenly think: “I am going to miss this”. Objectively, I am not sure why. The night before we slept in the van in the brightly lit parking lot of a Casino in Dodge City. I slept well; have I actually adjusted to van life?

La Mesa RV could not fix the broken water pump in our van despite two trips there. So infuriating. Was it incompetency, or revenge for our Massachusetts plates despite our US flag display? Am I overthinking this? Maybe it’s time to go home. Waiting for the van to be fixed I walked around the RV center into the immense industrial zone at the edge of the desert and missed the intimacy of New England, the signs of spring there, my family and friends.

Our last stop was New Mexico. We visited my cousins: the branch that moved west. We saw our old friends Kevin and Diana who rescued us from La Mesa RV (the first visit) and toured us around Albuquerque. We also had the fortune to catch up with our college painting professor, Ed Epping, sipping beer around a pinyon pine fire in his back yard. He and his wife Peggy Diggs live in Galisteo New Mexico in a breathtakingly beautiful and remote setting. They set me on my life’s path and I wanted to thank them. This trip has been all about hiking and birding and visiting.. not so much culture. But I did get a snapshot of the cities of Albuquerque and Santa Fe. They are covid-quiet but they are not immune to the political unrest shaking our country..with a uniquely Hispanic/Anglo/Indigenous slant. In front of the Albuquerque Art Museum Diana described the melee in which a protester was shot at a demonstration against a statue of Juan de Onate, the celebrated Hispanic colonial governor of old Albequerque. Oñate’s period as governor was marked by a violent repression considered severe even by the standards of his time. He killed 800 Indigenous people in Acoma Pueblo and ordered his men to cut off the foot of at least 24 male captives. Not a great guy to celebrate, really.

Similarly in Santa Fe my cousin Louise pointed out the Obelisk marking the end of the Santa Fe trail, now covered with a plywood box. “We are not your Halloween costumes! We are not your dime store Indians!” a speaker shouted from the bandstand on the Santa Fe Plaza on Monday, Oct. 12, 2020, Indigenous Peoples Day in Santa Fe, the day the obelisk came down. It was toppled but not carried away. It was too heavy; hence the box. The obelisk refers to heroes that fought the “Savage Indians” and celebrates the heroism and fortitude it took on the part of the Hispanics and Anglos to settle this area. The word “savage” had been previously chiseled out, but that was not enough, the monument had to come down. Everyone in Santa Fe is angry. History is written by the victors, but this is a complicated history, especially now. My cousins have spent their lives as medical doctors to the residents of Santa Fe including the local Pueblo Indians. They are knowledgeable and sensitive to of all the issues involved and explain them well, but what to do about it is still confusing. 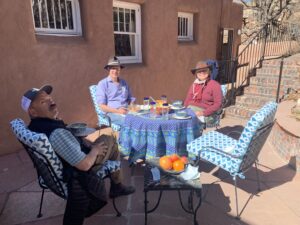 After a tour of Santa Fe we traveled with them an hour north to Cliff River Springs, a small nature-centric resort managed by my other cousin, Hope Atterbury. Hope has taken a ranch in the mountains and turned it into a refuge. Artfully appointed rooms in a southwest style, comfortable beds, fascinating books, well stocked kitchens, outdoor fireplaces and a pond for swimming and boating in the summer: it felt like heaven. Cliff River Springs is one hour north of Santa Fe in the mountains. It is near Georgia O’Keefe’s studio in Abiquiu and just above the famous hot springs in Ojo Caliente. Check it out if you are in the area..  https://www.cliffriversprings.com/ After a few days at the ranch sleeping, hiking, eating lovely outside meals, discussing family, primary care medicine, travel, retirement (or non-retirement), and life at the brink of 65 it was time to say a sad goodbye. We vowed to return.

Now that I have been there, I am here to report that Tucumcari actually exists and I cannot get the song “Willin” out of my mind. The lyrics: “and I’ve been from Tucson to Tucumcari, Tehachapi to Tonopah” ring true as we now know exactly where all those places are. We drove mile after mile across New Mexico, the Panhandles of Texas and Oklahoma and finally into Kansas, chased by tumbleweeds. I listened to all the covers ofthat song, a great soundtrack to our trip, though James thought it a bit redundant. I prefer the version by Little Feat, though Linda Rondstadt does a good rendition. Also, thanks to Instagram, I have been made aware of an excellent cover by Seatrain; see links below. Tucumcari is on the fabled Route 66 and has the neon to prove it. Some of the town has fallen into disrepair, but a few of those motel signs are works of art, and have been lovingly restored.

We reached Lawrence, Kansas in time for a late dinner last night and now, the next day, my head feels like it is still traveling even though my body has stopped. It’s weird, but I will get used it. If anything, this trip has taught me that.

Thanks for reading and stay safe.
Julia Then and Now: the way information travels across the west. At the Art Museum.. where the missing sculpture was. Petroglyph National Monument out side of Albuquerque 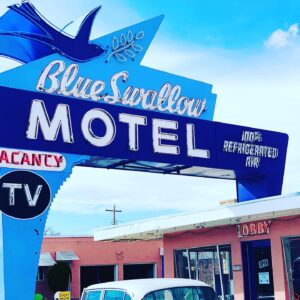 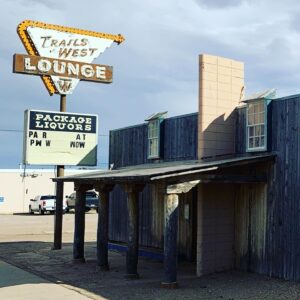 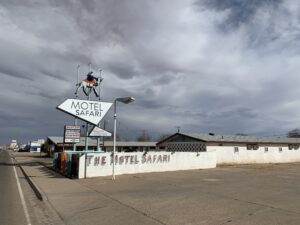