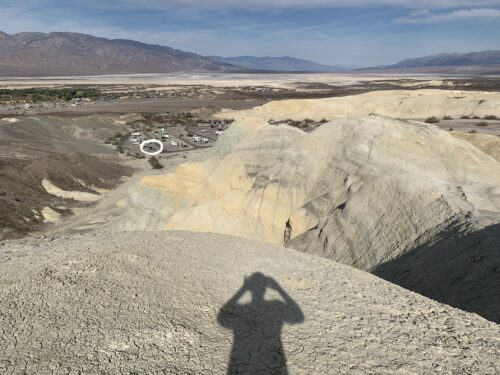 Looking down at our camper at Texas Springs Campground

Texas Springs Campground at Death Valley is familiar; we were here last year during Covid.  That was the first time it dawned on me that the van might actually have been a GOOD idea.   “Van Life” is best experienced in warm, dry weather.  Death Valley  is the warmest place in the lower 48, and one of the biggest national parks in the southern part of our country.  It has multiple mountain ranges and a huge valley formed by tectonic plates that are still moving apart.  Badwater Basin is the lowest elevation in North America: 286 feet below sea level.  It is a desert of huge colorful rocks, canyons and gravel, and very little vegetation.  The exposed rock has been mostly unsuccessfully mined.. except for Borax! Remember the 20-mule train?  In 1923, when even Borax didn’t work out, it was designated the Timbisha-Shoshone tribe reservation and a National Park.

It is only a day’s drive south of where we were staying previously in Truckee/Lake Tahoe, but we took our time getting here.

First a fishing/camping weekend with the kids took us just over the border to Pyramid Lake, Nevada.  The lake is managed by the Paiute tribe and has a large population of Lahontan Trout that were reintroduced from near extinction.  Isabel, our daughter, arrived with Stoddard, her twin, and his new friends (via girlfriend Kira) from UC Davis.  These people are professional adventurers, with tricked-out camp-trucks and camp-stoves, and all the gear and dry flies needed to catch very large trout.  And catch trout they did.  They also made semi-professional trail dinners, entertained us with work and adventure stories and taught us something about what it is to be a Californian and just about to turn thirty.  A soft-spoken older Paiute woman in chinos driving a white truck checked our permit on the last day and wished us well. It was a win all around.

Historically this part of the world’s economy relies on extraction: extraction of minerals and oil, extraction of animals (to the point of extinction, like the Lahontan trout), extraction of anything that will make a buck.  The movie “There Will be Blood” is a healthy corrective to any sentimental thinking about the expansion of white men into the American West.  Newer industry in Nevada is also kind of scary.  It includes large tech information companies in sci-fi barren locations harboring computer data silos, like Switch.

But nothing compares to the US military.

After a “get-organized” night in a Courtyard by Marriott in Reno: showers, car wash, haircuts, new shoes and groceries, we travelled south to Walker Lake:  a lonely but beautiful saline lake in the middle of nowhere.  Or so we thought.  Once the sun went down the twinkling lights of what looked like a town in the distance told us we were not alone. The next morning we headed south.  Big low houses painted desert buff appeared everywhere, like army barracks embedded in the sand.   Was it an army base? A closer look showed that the barracks had no windows and no apparent doors; this would be pretty inhumane lodging in the desert.  Pretty soon a rotary appeared with a huge American flag and a sign announcing the modest town of Hawthorne, Nevada.  The locals work at the  Hawthorne Army Depot : three huge ammunition storage and production areas on 147,000 acres. The facility went on and on for miles on both sides of the road. Air Force airfields, nuclear testing sites, and unmarked vast areas with scary fences form a large part of Nevada, where the US Government owns 81.07 of the land.  This desert country is vast, unpopulated and beautiful for the most part, but you can tell where the people have been in this huge expanse.  Where the military isn’t, the straight lines in the landscape and the degraded vegetation indicate mining concerns, ATV trails, cattle ranching, all of which can seem desolate to this New Englander.

So it is a beautiful thing to be in a natural area like Death Valley or Pyramid Lake where the land has been undisturbed and not lately touched by man. A landscape that looked forbidding and sad outside the confines of a park or a reservation turns to a wonderland in its natural state.  Conservation will only become more important as time and “progress” continues.

We spent four days in Death Valley, hiking the canyons and seeing the sights before moving on. 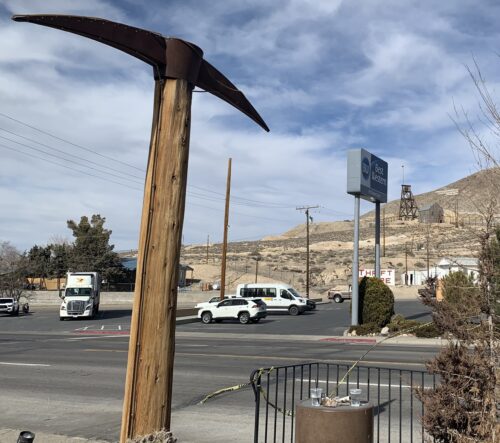