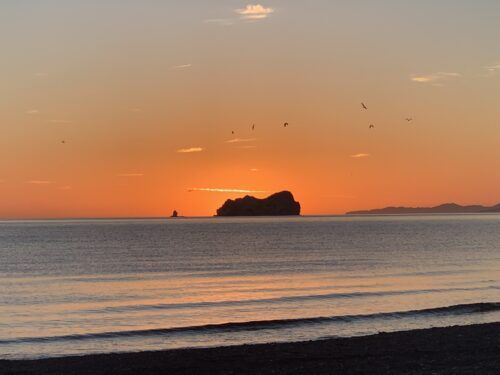 We have finally made it to La Ventana, BCS, (Baja California Sur) Mexico, our destination. It was a long trip. The border crossing at Mexicali went well, though confusingly James was invited into the border office to pay an “overlooked” $80 fee. It may or may not have been a bribe. That was followed by 900 miles on a one-lane highway at 45 mph through the Sonoran Desert. Our comfortable casita at the Ventana Bay Resort is feeling pretty good right now: it is nice to stop moving.

Mexicali is a large bustling town of confusing streets and signs (maybe because they are in Spanish). Traveling South from Mexicali human density drops rapidly. San Felipe is low key with colorful taco stands, RV parks and sport-fishing outfits that cater to day-trippers. Below that on Route 5 humans thin out almost completely, and nature takes over.  At 150 miles from the border you are lucky to find a gas station, let alone a cell.

What you do find are desert mountain ranges, circling buzzards, old lava flows and cindercones, endless strange Seussian cactus forests covered with tiny desert flowers, all punctuated by jaw-dropping vistas of the ocean. Our route crossed the peninsula between the Pacific Ocean and the Sea of Cortez several times.

At the Vizcaino biosphere preserve near Guerrero Negro on the Pacific side we decided it the effort was definitely worth it.

After 30 minutes going 10 mph on a rutted dirt road through salt flats with almost no signage we almost turned back. A “heated”discussion ensued, but we persevered and finally reached a lonely campsite near a deserted bay. Germans, French, Mexicans and American nature lovers pulled in soon after us.  That evening on the dock James counted 23 species of shorebirds feasting on the mudflats at low tide.  The next day a boat ride took us into the middle of pods of gray whales.  Mother and baby whales were in the last days of hanging out in the bay before they travelled North for Alaska for a summer of eating krill, and they were bored.  They swam up to our boat out of curiosity, the mothers gently pushing the babies into the boats, and drenched us with water they snorted through their blowholes, all while looking at us with their ancient eyes. They let us rub their noses, and one guy on our boat kissed a barnacle-speckled snout. Wow.

On the Sea of Cortez side we camped on beaches, watching as desert islands in the sea caught the last of the setting sun.  There were dolphins in the distance, ospreys carrying home dinner, huge clam shells and fish carcasses strewn over the shore.  One morning a pelican left his buddies in the water and walked up to us. I hid in the van. James deduced the bird was an adolescent.  They watched each other warily for a good 15 minutes, the pelican looking sidelong at James from around his huge beak.  Finally  the pelican took a taste of our orange mat and spat it out, leaving unimpressed.

An RV park with a spot under a banana tree in Mulege procured WiFi for a much needed check-in. When we picked our heads up and looked around it became clear that the RV camp doubled as a village for American expats.  Whether it was for a week, the winter, or the rest of their sunset years, the Americans seemed to be enjoying life. Living is easy at $8 a night for full hook-up, and the cheap beer, fresh tasty food and warm, dry weather every single day doesn’t hurt either. It beats Idaho in March, said Doug, in the van next to ours. Other North Americans we have met on the road are from Colorado, Vancouver BC, Washington State, Wyoming, mostly westerners.  Baja might be the equivalent of the Florida Keys to the American West? A good place to get lost and drink Margaritas.

(Doug Curran, our van neighbor is a wonderful photographer of Baja highway alters. Check it out here: Doug Curran Photographer/ We Are Nothing)

Tonight my sisters and brothers-in-law arrive from Portland Oregon for a week of sun and relaxation with us on the Sea of Cortez. Let the party begin! 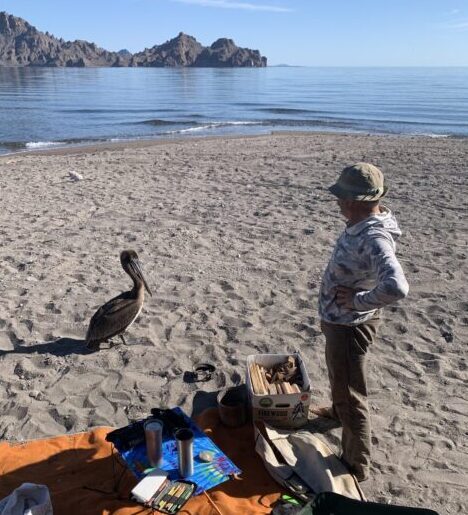 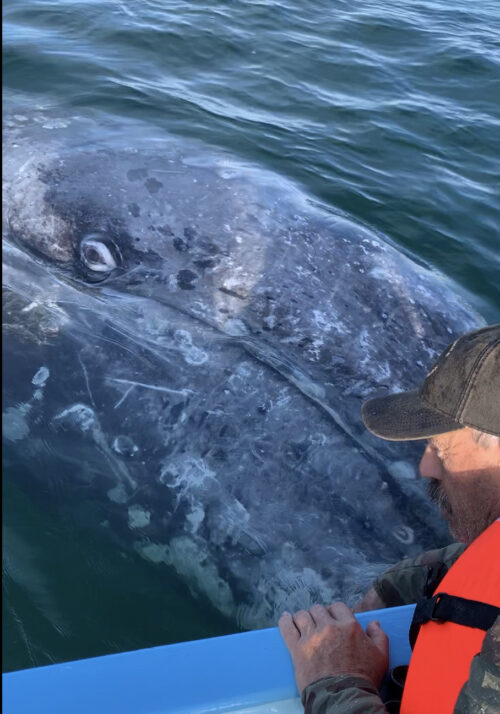