#7 Mammoth and the Sierras 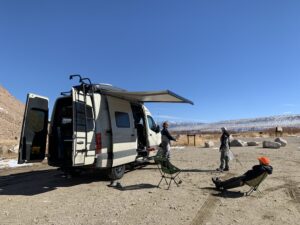 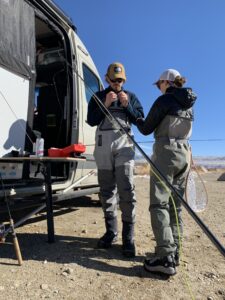 It’s a beautiful day in the Owens valley of California near Mammoth Lakes and the Nevada Border. We are hanging out with our son Stoddard and his girlfriend Kira who are fly-fishing on the Owens river with gear they got for Christmas. We are enjoying a craft Kombucha. It is warm in the sun and the mountains above are covered with fresh snow. It is a truly glorious scene. Was it worth buying the van for?

Two days ago we were in the same location having a major crisis of confidence. Caltran, the California highway patrol had blocked all passage to Mammoth Lakes and we were looking at another night parked in the snow. Having never heard of Caltran 24 hours before it was all we were concerned with, checking its posts on twitter and the quick map every hour. The massive snow storm had caused hairy driving conditions and a major re-rerouting of the next leg of our journey to see our son Stoddard and his girlfriend Kira at Mammoth Lakes Covid-free in a cozy condo. We had been turned away from the pass yet again by a courteous Caltran officer and began getting ready for the evening in a lonely campground with darkening skies, filling our van with water from the campground pump and thinking about reheating the beans. So close and yet so far. What was wrong with us? Did we not get the memo that it was winter, and that the Sierras take no prisoners? That we are crazy and way too old for this? What were we thinking? 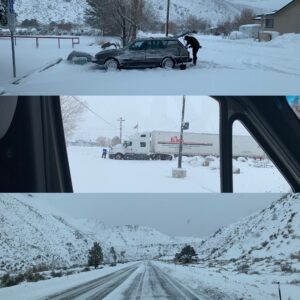 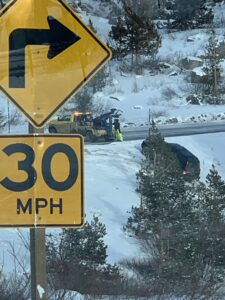 We had started out our journey to Mammoth in fine form, after a week-long sojourn south of the Bay Area in Saratoga, staying in an old California shingle-style home. Our friend Fiona’s parents bought this moderate comfortable house in the 1960’s back when Saratoga was a small town surrounded by orchards. Fast forward 60 years and the house is an anomaly, surrounded by antiseptic estates owned by Silicone valley gazillionaires. Fiona’s mother passed recently and left her home to Fiona & Tor and Fiona’s brother. It has a wonderful kitchen with bookcases filled with cookbooks and classic cookware, a yard with a jumble fruit trees, Tor’s sculptures, potting barns, chickens, bee hives and a garden filled with all manner of flowers, even ones that bloom in January. James got a lot of new birds for his list just sitting in the yard, including an Anna’s hummingbird and a resident Bard owl. I fed the chickens, cooked and worked. James continued with his remote job waking up often at 5 AM (8 AM EST). We took long walks past all the mansions, up into the mountains and looked down on all of brownish, built-up Silicone valley. We could see the city of San Jose, the Google and Facebook “campuses” far below, now silent. What was going to happen to this place? If it didn’t burn down due to the fires ravaging the state, would it all spring back into that crazy place again post Covid? Despite these disturbing ruminations it had been a restorative “spa” week at their house.

We took off from Saratoga and headed west looking forward to a happy reunion with our son Stoddard who is working remotely from ski heaven in the Sierras for a few months. (I mean, why pay San Francisco rent if you don’t have to? Stod was the kid who saw California for the first time in high school and asked us what lottery had we lost not to be living there. It stands to reason he moved there the first chance he got and took up surfing. He and Kira have managed to hold onto their jobs in tech start-up and turned the whole Covid nightmare into an opportunity to live in fun places. They inspired us!) 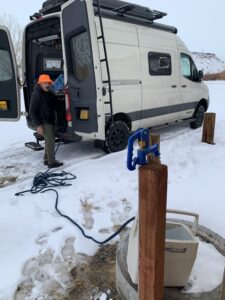 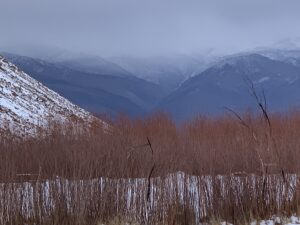 Back in the gloomy campground the snow was swirling and we had paid our $13 for the night. We checked Twitter one last time before reheating the beans, and found that the pass had opened for “escorted” trips up to the Mammoth lakes mountain village. We drove through the driving snow, behind a plow and were greeted by a gourmet dinner and a hot shower. Things were looking better.

When the sun finally came out the immense mountains sparkled. It was beautiful and vast. We were with some great kids.
We bought ski passes for a few days and rented gear, the conditions were awesome. All of LA was out and enjoying the snow in some outfits you would never see at Wachusett! We spent a “Van-life” day fly-fishing in the once-gloomy campsite that turned out to be a classically beautiful fishing spot.

And every 20th car in California is a van not unlike ours. It makes sense here.

As an aside, California just kind of blows my mind. I mean what DON’T they have?
This list is no doubt incomplete: the Pacific Ocean, the Sierra Mountains, fertile Central Valley filled with fruit trees and produce year-round, Hollywood, Palm Springs, Wealth, LA, SF, liberals, vast beautiful deserts, good weather, Big Sur, etc. On the other hand it has Old Testament conditions: droughts, tsunamis, fires, earthquakes and over population. It is overwhelming. But fun to visit.

Next stop: SUN! We take off tomorrow for parts unknown but they need to be warm, and have WiFi.

Thanks for reading and stay safe, Julia 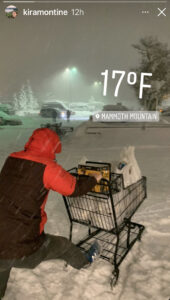 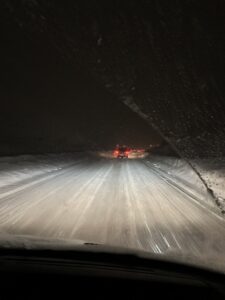 Stod grocery shopping in anticipation.    Heading up the mountain 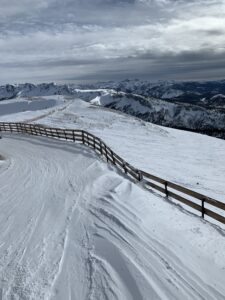 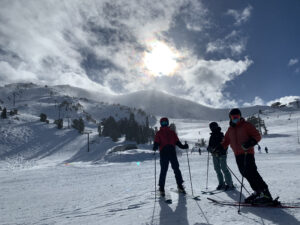 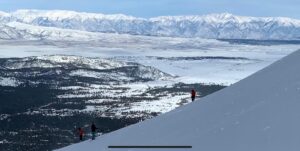 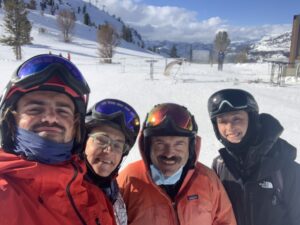 The next day..beautiful day, perfect snow! 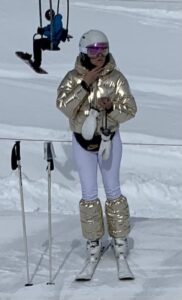 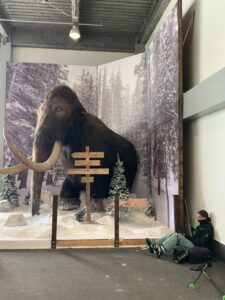